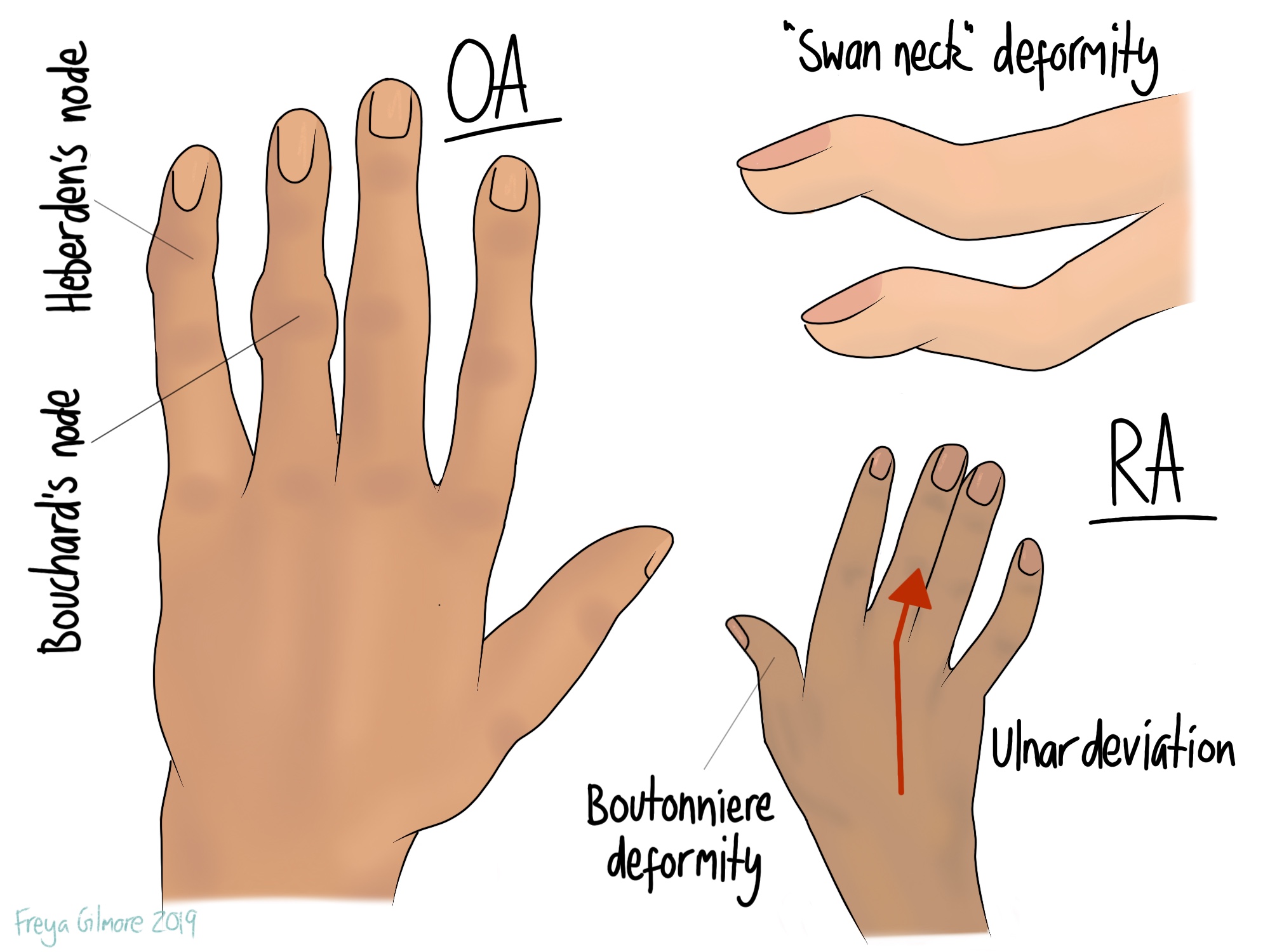 Rheumatoid arthritis (RA) is one of the most common autoimmune arthritis conditions. It is an inflammatory disease that typically affects the hands and feet, causing pain and stiffness, and eventually deformity if left untreated.

Early diagnosis and management is recognised to slow and limit the effects of the disease. Your osteopath will work alongside your doctors to support you, as strong medication is often recommended, with the aim of reaching "clinical remission". This means that symptoms are managed to the point of being non-existent. Osteopathy alone will not be able to achieve this, but we may be able to help maintain some movement.

RA can be hard to spot at first, as symptoms generally develop slowly for no apparent reason. It is largely unknown why RA develops, but we know that smoking is a risk factor. Typically symptoms begin between the ages of 30 and 60, but they can start earlier or later than that.

In the early days, symptoms can be quite vague. Generally feeling unwell or fatigued might be the first symptom for some people. Others may feel discomfort in their joints first.

Early joint pain may manifest as a low grade, throbbing ache in the joints. RA affects joints on both sides of the body, most commonly the hands and feet. Joint pain is generally worst after rest, for example first thing in the morning. This behaves differently to normal morning stiffness in that it lasts over half an hour.

The Swan-Neck deformity refers to the changes in the furthest two joints in the finger. Movement is lost over time, and these joints remain relatively fixed in this position.

Ulnar deviation is the term for the hand bending out to the side, away from the thumb. This becomes the neutral position in some people with late stage RA.

The Butonniere deformity is a bony lump on the top of a finger joint. It is not exclusive to RA, and can be caused by other conditions or an injury. It comes with reduced ability to fully straighten the joint.

RA does not just affect the joints. People with RA are more likely to suffer from heart attacks or strokes, which is another reason why getting the correct medication is so important. Some people also suffer with dry eyes too, which can also be managed with medication.

We cannot cure your RA, and as mentioned above, we want you to have access to the right medication. We may be able to help you manage your joint symptoms alongside the support you get from your rheumatology team.

If your osteopath suspects RA but you have not been diagnosed, we can support you in getting your diagnosis. You might expect your GP to perform blood tests, or potentially scans to see how the joints look.

Like resting makes RA joint pain worse, gentle movement can make the joints more comfortable. During treatments we may move your joints for you to flush the inflammation along and reduce swelling. Exercises can be useful too, and if appropriate we will prescribe you some. There are longer term benefits to improving both your flexibility and strength, so we aim to give you a plan that you can stick to.

Book now for osteopathic support for your Rheumatoid Arthritis

At Ilminster Osteopathy my goal is to help people achieve their goals whatever they may be. Watch our video to find out more.