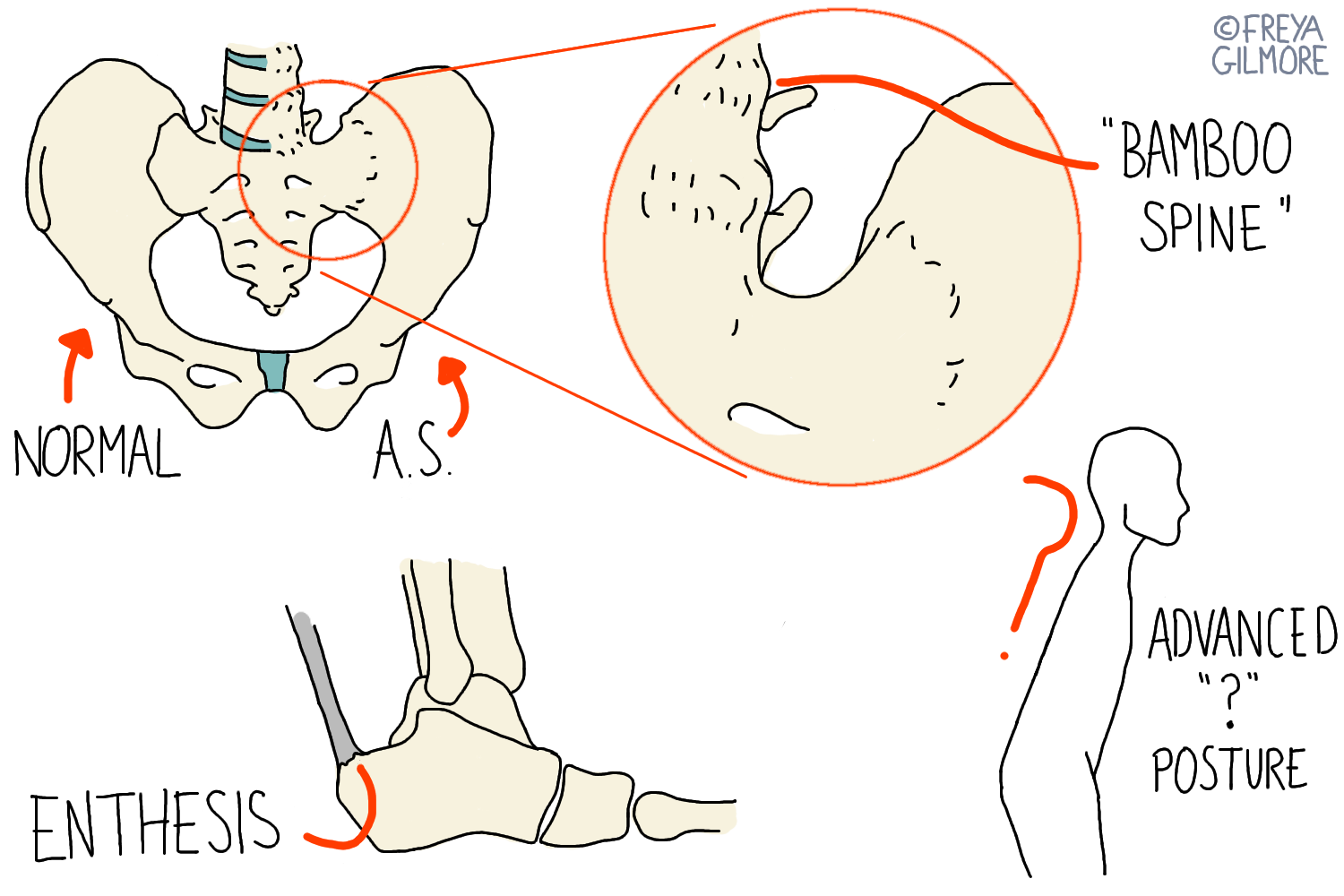 Osteopaths see plenty of cases of lower back pain, so we have a good idea of what “normal” back pain looks like. One condition that needs specialist intervention, but is often missed, is axial spondyloarthritis (AxSpA). This is an inflammatory, rheumatoid condition also known as Ankylosing Spondylitis (AS) in its later stages.

AxSpA behaves similarly to typical lower back pain in the early stages, but there are some important differences. Because it is inflammatory, it is worse with rest and better with movement. This leads to stiffness and pain in the first 30 minutes after getting up in the morning. After exercise it might feel better temporarily, but working too hard will aggravate it too.

It may be accompanied by seemingly unrelated symptoms elsewhere, such as achilles tendinitis. AxSpA causes inflammation at the junction between tendons and bones, with the heel commonly affected. Uveitis, inflammation of part of the eye, is also associated with AxSpA.

What Happens in AxSpA?

The reason we want to identify AxSpA as early as possible is that is needs medication to slow the progression. The name Ankylosing Spondylitis means “fusion and inflammation of the spine”. Over time, inflammatory episodes affecting the joints of the spine and pelvis cause damage. The body reacts to try and heal by laying down bone- but it lays it over the joints themselves. If left untreated, this leads to fusion of the joints. In the past, AS was only recognised in this late stage, when the damage had been done and the disease may have “burnt out”. At this point, the posture has changed permanently to resemble a question mark, as the base of the spine is flattened.

Osteopaths cannot cure AxSpA, but we can still play an important role. Because of the widespread misunderstanding of the condition, people in the early stages can still slip through the medical net. We are in a position to identify back pain that doesn’t quite behave as we expect it to, and to support you in your journey to rheumatology. The medication to prevent the progression of AxSpA is strong, and can only be prescribed by a rheumatologist. Although we can suspect the condition, diagnosis can only be made by a rheumatologist too.

For patients with a diagnosis, whether they choose to take medication or not, we may still be able to provide some support. Treatment for people with AxSpA is gentle, as the fused areas are more brittle than normal. Excessive treatment, like excessive exercise, can increase inflammation. But gentle movement through the affected joints may act similarly to light exercise in providing some temporary relief.

AS is a life changing condition, so it is important to have support. NASS is a charity that is working to improve the outcomes of patients, as well as providing a community for those affected.

If you think there might be something more to your back pain, or want support with your diagnosed AxSpA, book an appointment online now.

At Ilminster Osteopathy my goal is to help people achieve their goals whatever they may be. Watch our video to find out more.